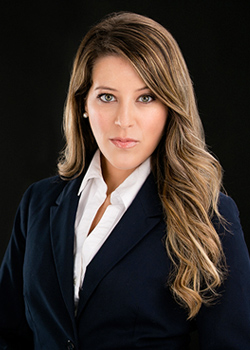 Christina was born in San Juan, Puerto Rico where she grew up with her parents and brother until the family moved to Orlando. After graduating from Cypress Creek High School, she traveled to the west coast where she attended the University of California, Los Angeles. During her time at UCLA, Christina majored in Political Science and performed in multiple theatre productions. She also interned at UCLA’s Student Legal Services where she was exposed to numerous fields of law including criminal, civil, real estate, and immigration.

After graduating from UCLA, Christina went on to attend Barry University, Dwayne O. Andreas School of Law, where she was a member of the Phi Alpha Delta Law Fraternity and where she excelled as an avid trial team national champion. During her first year of law school she competed in The Florida Bar Chester H. Bedell Mock Trial Competition. The following year she traveled to San Francisco for the California Attorneys for Criminal Justice National Trial Competition and to Fort Lauderdale where she was a semifinalist at the American Association for Justice trial competition. In 2014, Christina was selected to compete in the Puerto Rico Trial Advocacy Competition in San Juan, where she took first place after beating Harvard Law and was awarded the National Title.

Christina She joined Florida Defense team to lead our personal injury department, while at the same time assisting with our strong advocacy in the criminal defense and criminal justice arena given her excellent trial skills.  She has experience in multiple areas of law including Workers’ Compensation, PIP, Auto Accidents, Slip and Fall injuries, and medical malpractice. Currently, she is representing clients and families injured as a result of medical negligence including cancer misdiagnosis, nursing home cases, birth-related injuries, and wrongful death. Christina feels privileged that every day she has the opportunity to combine her passion for the law with the ability to make a difference in a person’s life. To her, there is nothing more rewarding than helping children, individuals and families who are facing these types of issues.

Christina currently resides in Lake Nona and enjoys spending time with her family, salsa dancing, and traveling. She also coaches Barry Law’s trial team and is an active member of multiple legal organizations around Central Florida.

How Can We Help?