Is Drug Possession a Felony in Florida? 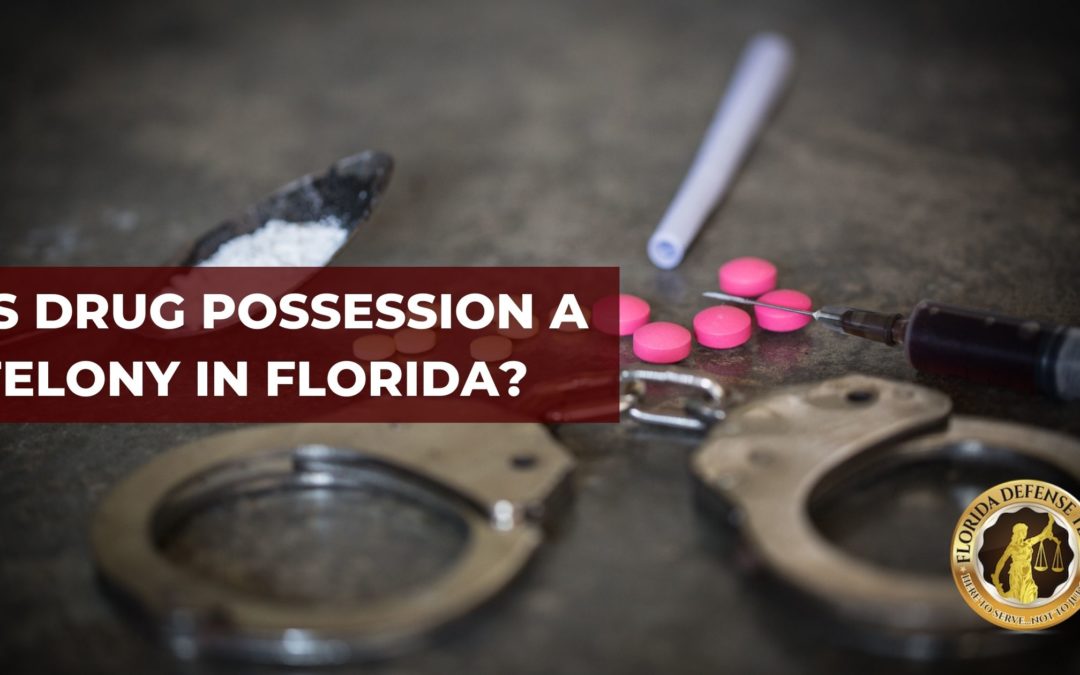 Getting convicted for drug possession can be a terrifying situation. There are many factors that are constantly changing and you must be ready to defend your case. In these instances, it is vital to have a professional and experienced attorney at your side like the lawyers of the Florida Defense Team. We work hard for our clients, so they can get the best results every time.

Drug possession is a serious crime that can have lasting consequences on a person accused. Before you can learn to deal with the outcome of a drug possession charge, it is important to understand the terminology associated with it. For instance, what constitutes “possession”.

Possession deals with many components. The most important difference between a drug possession charge and another drug charge is that the person who is charged with possession did not manufacture, distribute, or sell the drug.In order to determine what is and isn’t a drug possession, there are several criteria that must be met. First, the person accused must have had actual knowledge of the drug. That is, the person must have known that the drug was where it was found and that it was a drug. Beyond that, the accused also has to have had control of the drug, and the drug must be considered a controlled substance under Florida law.

Should all of those criteria be met, then it is possible that the person accused could be charged with a third-degree felony for any drug unless it is the possession of marijuana not exceeding twenty grams (any amount less than 20 grams) is a misdemeanor.

You could also jointly possess something – many times people say “how can I be charged for possession if it was not on me?” A car with multiple passengers could all be charged with possessing the same drug, if it can be proven they each had knowledge of it and the ability to exercise control over it.

What Are The Penalties For Drug Possession in Florida?

First degree misdemeanors (possession of cannabis less than 20 grams) can result in up to a year in jail as well as a maximum fine of $1,000.

For felony possession, it will depend on the type of drug and the amount. A small amount of cocaine, meth, oxycodone, Xanax, or heroin, for example, would be a third-degree felony that carries a maximum sentence of 5 years in prison and a max fine of $5,000. However, if the amount possessed is a larger quantity, you will enter the realm of trafficking
charges which carry mandatory minimum prison sentences even if it is your first offense.

Getting convicted for drug possession has other consequences as well. It could result in probation as well as the suspension of your driver’s license. In certain cases, you could be barred from certain positions of government employment as well as some types of financial aid for college. You could also disqualify yourself from public housing, state licensure, and you could have issues obtaining regular non-governmental employment.

What Are Some Defenses With Drug Possession?

It is a defense to possession that the accused lacked knowledge that the drug was there. It is also a defense that it was unknown to be a controlled substance. There are also defenses that could come as a result of how it came to be that the person was charged with possession.

Was it a traffic stop? Our lawyers make sure it was in fact a lawful traffic stop, because if the stop is unlawful, the charge may be dismissed if a motion to suppress is granted based on the unlawful stop. It could also be suppressed due to an unlawful search.

These are just a couple of examples of how these charges can be defended. Each case is different so it is important that you speak to an experienced Orlando criminal attorney that can explore all of the potential defenses in your case and make sure they are fighting to get you the best possible result.

Florida Defense Team is a group of expert lawyers that are experienced in drug possession charges. We know the hectic nature of dealing with a drug possession charge and that is why we strive to perfect our defense alongside our clients. If you are interested in learning more about our services or talking to one of our incredible attorneys, contact us today.