When Can the Police Pull You Over in Florida? 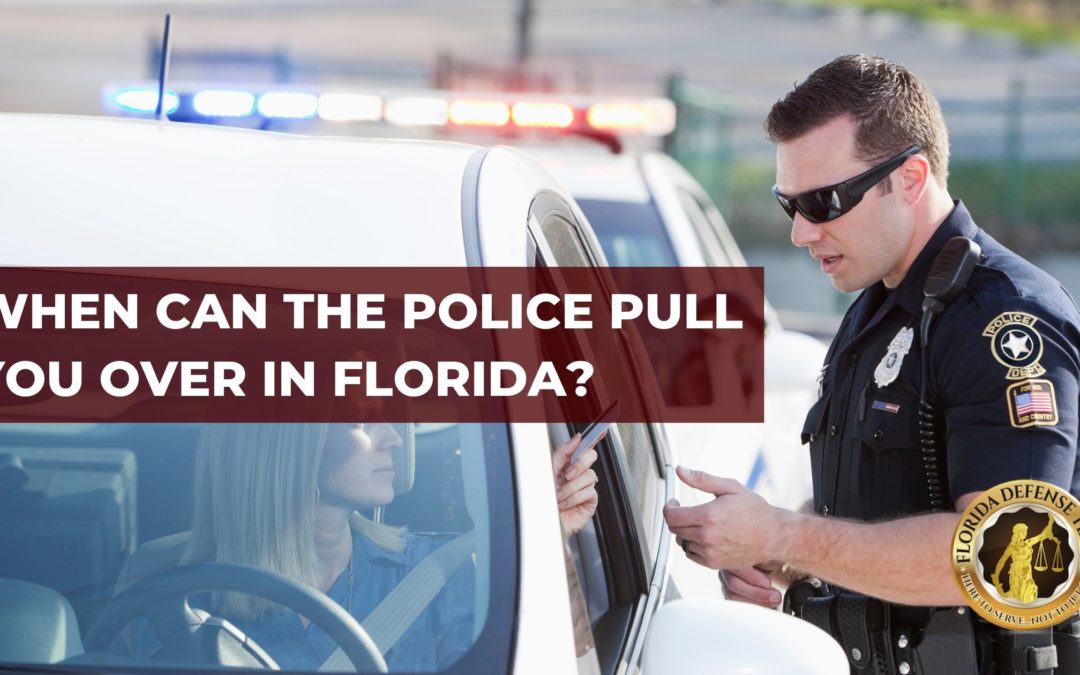 A traffic stop can become a much larger legal issue for some people. Drivers in Florida may wonder when a police officer can legally stop them. When is pulling someone over okay, and when is it a violation of the driver’s rights? All drivers should understand the basic guidelines officers need to use to decide when to stop a vehicle.

Here are some reasons why a police officer may pull you over.

A passing police officer may notice someone swerving in their lane, driving too close to a car in front of them, or not keeping a steady speed. The officer could suspect intoxication, illness, or an unlicensed driver. The stop may occur even if the officer did not witness the behavior. Sometimes the traffic stop is because of a complaint from a concerned citizen.

Speeding, the failure to stop at a stop sign or red light, or not wearing a seat belt could become a valid reason for a traffic stop. Drivers must obey all traffic laws, or they can face penalties. During the stop, the officer will check the vehicle and the driver to make sure the driver followed all other motor vehicle-related laws. Some of these checks will include looking for a valid driver’s license and that the owner registered and insured the vehicle. Drivers with unrelated warrants could also face arrest or additional fines when the police search their records during the stop.

An automobile in disrepair could also lead to a traffic stop. All lights must work properly, and the vehicle must appear road safe. If the police notice any excessive damage, like a severely cracked windshield, a stop can legally occur.

Sobriety checkpoints can legally occur on public roadways when law enforcement believes they are necessary for safety. Checkpoints often appear during holidays and around the scenes of popular events due to the frequency of alcohol consumption on these occasions. The police must stop and speak to all drivers through a checkpoint and not randomly drive around and stop drivers in the area to determine their level of intoxication.

What About Illegal Vehicle Stops?

An illegal stop is when an officer decides to stop a vehicle that does not meet any of the guidelines mentioned. An officer cannot stop someone just because they recognize them from a prior incident or because they look suspicious.

Drivers should never experience any punishment for anything found or claimed during an illegal stop. The actions of the police officer make the charges inadmissible in court.

Police officers have rules they need to follow like every other citizen. Many officers do follow these restrictions and only make stops that protect the public. Some members of law enforcement do not follow the laws as carefully as required.

Anyone victimized by over-aggressive officers or members of a police department that make arrests without adequate cause needs to stand up for their rights and fight the charges made against them.

Contact Florida Defense Team, an Orlando-based traffic violations attorney, if you suspect any Florida traffic stop that involved you or a loved one happened illegally.